In order to reduce the twist vibration of the cabinet which occurred by the direct drive system, the original silent sink rotor is adopted.
In the direct drive method, the motor of the drive source is located almost in the center of the cabinet housing, so the rotational force that is the reaction of the motor drive is generated in the cabinet. This is the same phenomenon that the aircraft starts rotating in the direction opposite to the rotation direction of the rotor when the helicopter takes off, and in the helicopter, the rotation is suppressed by a small propeller at the rear of the aircraft.
This problem does not matter much if there is no torque fluctuation in the motor, but in reality, the torque fluctuation increases due to the load fluctuation during record tracing in addition to the torque fluctuation of the motor itself, and as a reaction, the direction of rotation in the cabinet Twisted vibration is caused. This shakes the arm base and affects the sound quality.
In the silent sink rotor system, a sink rotor that does not move when the motor is in steady rotation and moves so as to remove only the reaction when there is torque fluctuation is mounted on the lower part. This has reduced the rotational vibration level of a cabinet to 1/4 or less by absorbing the reaction between motors with each other, and has eliminated the twist vibration.

The FF (Friction Free) coreless motor which solved the problem of the conventional coreless motor is adopted as a drive motor.
The stator of this motor is made of non-magnetic material, and the yoke rotor for forming the magnetic circuit is fixed to the spindle. Therefore, by rotating exactly the same as the rotor magnet, no attractive force acts between the stator and the magnet, and no pressure other than the rotor's own weight is applied to the bearing.
Moreover, since the yoke rotor that forms the magnetic circuit rotates together with the magnet, ideal operation that neither magnetic hysteresis nor eddy current occurs is possible. Furthermore, the smooth rotation is enabled by adopting the linear drive system by the sine wave which can reduce the torque unevenness as much as possible.
If you remove the turntable and turn the spindle by hand, you can see that this FF coreless motor rotates smoothly and smoothly for a long time compared to the conventional coreless motor.

The quartz lock servo system is adopted as a servo circuit, the rotation speed is detected by the turntable which coated the magnetic pulse of 960 poles on the inner circumference, and the excellent rotation accuracy is realized.

The DOB (Dynaoptimum Balanced) tone arm (optimum support point tone arm) is adopted as a tone arm.
This arm was developed by approaching the mechanism of vibration transmission from the angle of theoretical analysis of the fulcrum position, and by placing the pivot axis at the dynamic fulcrum, the vibration picked up from the needle tip is transmitted to the pivot. It suppresses and also suppresses the transmission of external vibration to the needle tip.
In addition, high rigidity is achieved by adopting a brass arm pipe and a zinc die-cast arm base.
The XR-Q7II is equipped with two straight arm pipes that can be replaced according to the cartridge used and the height can be adjusted.

It is equipped with a computer-controlled photoelectric detection type, non-contact fully automatic mechanism.
This method does not adversely affect the basic arm performance such as deterioration of initial sensitivity. In addition, a safety design is applied to protect the needle tip, record, and auto mechanism, and if the tone arm is intentionally stopped during auto operation or if there is a mechanical trouble, all operations will stop after 20 seconds. ..

The solid mirror finish wood cabinet which adopted the high-density material is adopted as a cabinet.

Polyester-based composite resin is used for the turntable sheet.
Klikk for å utvide... 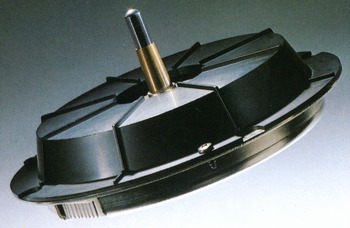 A record player equipped with a silent sync rotor.

The drive motor is equipped with a newly developed FF coreless motor that solves the problems of conventional coreless motors.
In conventional coreless motors, the stator is made of magnetic material, so a strong attractive force acts between the magnet attached to the rotor and the stator, causing strong mechanical friction in the bearing. Further, when the magnetic pole runs on the stator of the magnetic material, the rotor is dragged by the hysteresis phenomenon. Since the stator is made of a conductive material, there have been problems such as braking due to eddy current loss.
In the newly developed FF coreless motor, the stator is made of non-magnetic material, and the yoke rotor that forms the magnetic circuit is fixed to the spindle, and it has a structure that rotates exactly the same as the magnet of the rotor. Therefore, no attractive force acts between the stator and the magnet, and no pressure is applied to the bearing. Moreover, since the yoke rotor which forms a magnetic circuit rotates with a magnet, the ideal operation which neither magnetic hysteresis nor eddy current occurs is enabled.
Furthermore, by adopting a linear drive system, we are aiming for smooth and ideal rotation.

The quartz lock system is adopted, and the excellent characteristic is obtained by coating a turntable with a precise magnetic pulse of 960 poles while reviewing the bare characteristic of a motor.

The optimum support point arm (Dynaoptimum Balanced Tonearm) is adopted as a tone arm part.
The optimum support point arm has a structure in which the pivot axis is placed on the dynamic fulcrum, so the vibration picked up from the needle tip is not transmitted to the pivot, and the vibration from the outside is not transmitted to the needle tip. This improves the tracing ability.
Furthermore, in the tone arm of XR-Q7, the constituent materials are carefully examined, and the arm base is made of zinc die-cast, the arm pipe is made of brass, and the head shell is made of aluminum die-cast.

The pipe of the tone arm can be replaced at the base of the arm base, and the straight arm with the standard head shell fixed and the S-shaped tone arm with a universal connector can be replaced.
In addition, the height adjustment is ± 3 mm, and it can be adjusted according to the cartridge.

The photoelectric detection type non-contact full-auto mechanism controlled by a 4-bit microcomputer is carried, and each auto operation of auto read-in, auto return, auto cut, and auto repeat is possible.
In addition, manual operation can be performed without switching, and when the arm is moved by hand from the armrest, the turntable rotates, and the tone arm can be operated up and down with the Up / Down keys.

As a protection function, if the tone arm is intentionally stopped during automatic operation or if there is a mechanical trouble, all operations will stop after 20 seconds. Also, if the power is turned off while the tone arm is on the record board, it will return to the armrest when the next power is turned on, and will stop after the return drops.

The high-density material with high rigidity and little deformation is adopted as a cabinet, and the influence of howling and external vibration is reduced. 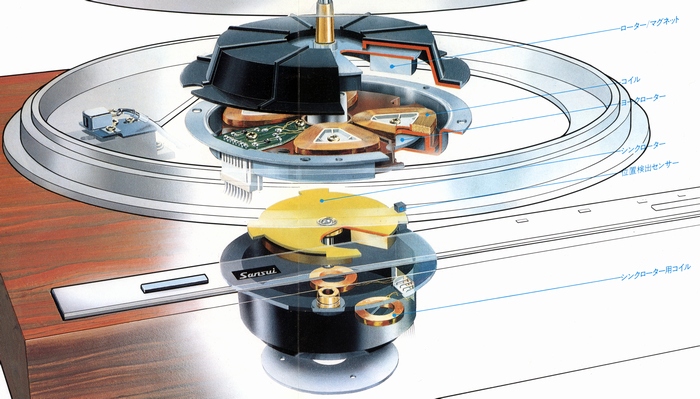 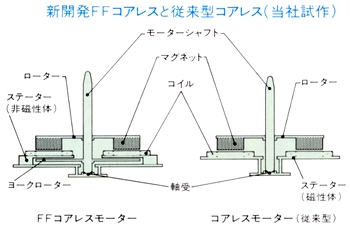 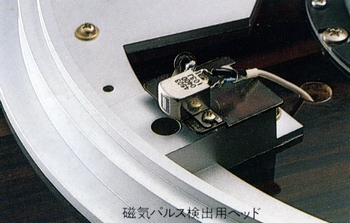