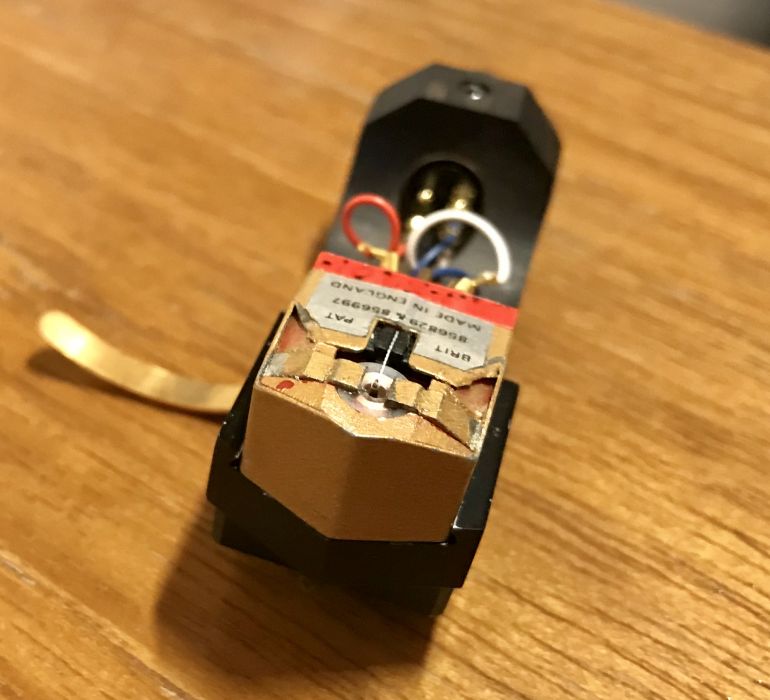 Oh, the shame! Why have I been denying myself this scintillating, shimmering bliss for so many years? Why have I even pissed around with moving-coils? Clearly - no, the London is of a magnitude beyond the best m-cs for clarity, detail retrieval, transparency, openness and speed. From the 12in mix of David Lee Roth's 'Just A Gigolo' to a mint pressing of Sam Butera's first (mono) solo LP on Capitol, the London reeks of analogue lushness, but with precision and finesse. You want Barbara Cartland romance, look elsewhere, and switch on that fat 300B.
Klikk for å utvide...

«Sound was glorious, with superb image placement, powerful bass and detail retrieval of the highest order... the finest cartridge I've heard in my 40 years in the industry.»
Klikk for å utvide...

Other cartridges (both moving coil and moving magnet) have styli mounted on the long end of a thin tube (cantilever) which works like a lopsided "see-saw." The short end of the cantilever attaches to either a coil of wire or a magnet. At the fulcrum point, a flexible "rubbery" sleeve functions as a pivot, allowing the stylus/cantilever assembly to respond to the "wiggles" in the LP groove. Because the front section of the cantilever, which holds the stylus, is much longer than the rear section that is attached to the coil or magnet, a large movement of the stylus is transformed to a smaller movement at the coil or magnet, possibly causing cantilever-design cartridges to sound dynamically compressed and lacking in transient attack. London Decca's engineers advise that this problem with dynamics and transients is compounded by the cantilever's "rubbery" fulcrum point which tends to absorb a significant amount of the stylus-generated motion before it can reach the coil/magnet electrical generator assembly. Also, a smearing of the sound is said to occur, which many folks refer to as "cantilever haze." The Super Gold has no long cantilever and no "rubbery" fulcrum point to absorb, dissipate and smear the vital musical energy. Instead, the stylus is attached directly to a magnetically active metal support just a few microns thick (armature) which passes through the center of the main generating coil positioned only about 1 millimeter above the stylus! The stylus motion is not inverted or "transformed" to a smaller value, as in long cantilever designs. Flowing from this immediate positive-direct scanning of the groove is a breathtaking, lifelike quality. The listener tends to feel that the performing artists are actually in the same room, with a startling, palpable presence. The Super Gold uses line-contact, polished, grain-oriented diamond stylus similar to the Jubilee's, mated to less costly generator coils and housing. If you have never heard the $2875 London Decca Jubilee, you may well think the Super Gold is the world's best cartridge! Subjectively, it offers 90% of Jubilee's unrivaled musical realism.»
Klikk for å utvide...